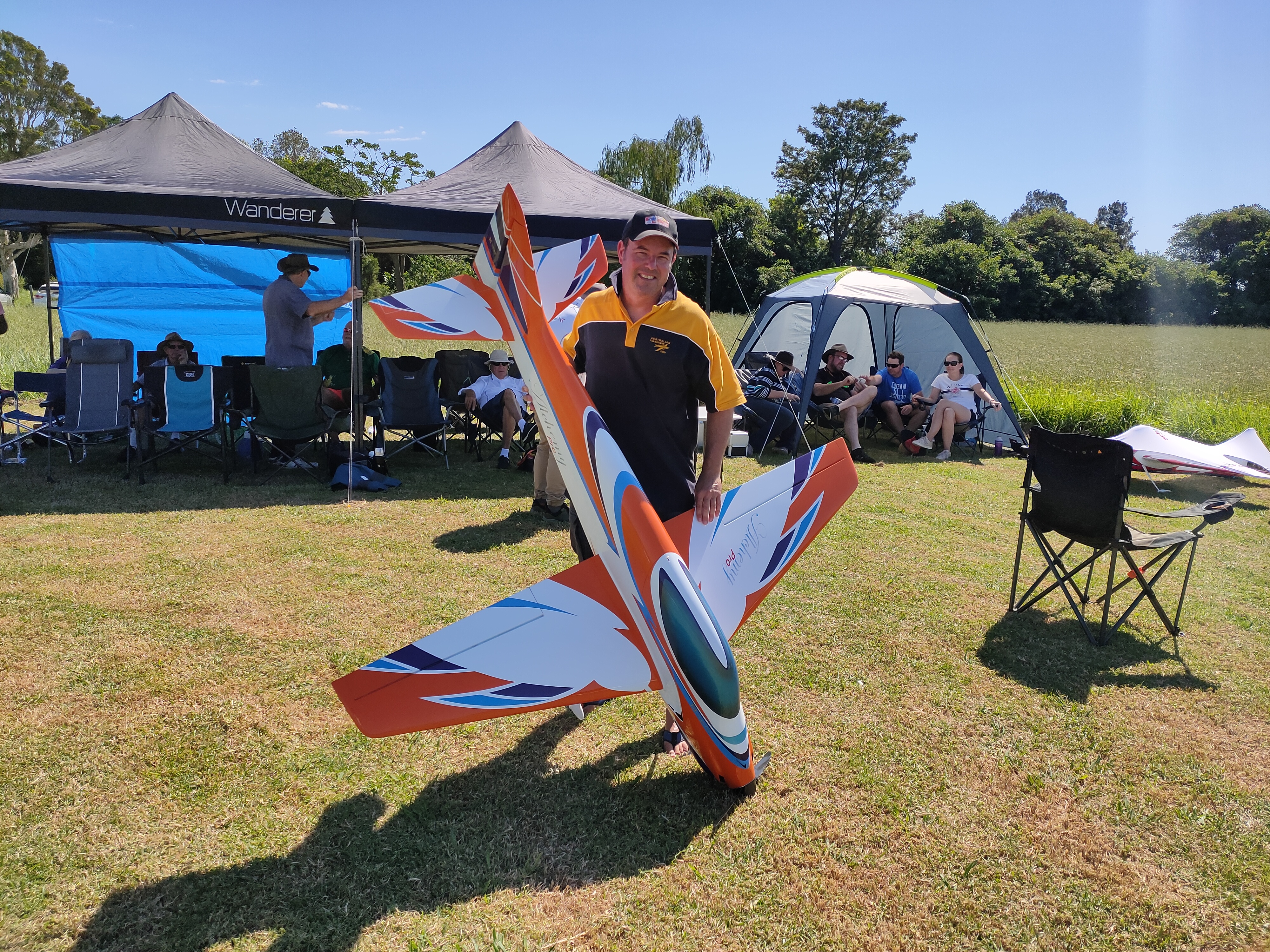 Well, our luck seems to have changed for the better at last. For the second month running, we were able to hold our February competition with none of the stress of pandemic or weather concerns. Let’s hope that this trend continues into the busy Pattern period coming up.

Thanks to the efforts or Tim Voigt, Brian McFarlane, Bill Garrod and Richard Knox, we had a superbly prepared field for the contest, with no flooding to complicate things.

Thanks also to Tim for making himself available to open the field on Friday for those pilots who wished to get in some practice.

For those of us driving down on Saturday morning, we started with misgivings as we were greeted by steady rain on leaving Sydney at 05h00, and drove down with the “Groundhog Day” blues, only for the weather to clear, and arrived at the field to overcast, and light winds, with no evidence of rain either in the sky, or on radar.

We had our best field for a long while, with 17 entrants, with three in Advanced, four in Expert, and 5 each in F3A and Masters. Our usual attendees were present, and boosted by the appearance of our out of state friends, Phil Spence and Chris Henry. Meaghan Voigt and Lori O’ Neil were also in attendance, with home baked cookies, and cold waters and beverages.

Once set up on a damp and gloomy morning, we kicked off on time, with Expert up first, followed by Masters, Advanced and F3A. The overcast remained, but visibility was acceptable, and winds light and variable, blowing slightly outwards, which caused some issues for pilots.

Due to some problems and delays, both from the equipment, and from a group which has not had this many entrants in quite a while, we completed 2 rounds for everyone, with Expert, Masters and Advanced completing 3 before we stopped.

Saturday night, most pilots staying locally repaired to the Bowling Club, for drinks and dinner, as well as a demonstration of the Flight Coach system.

Sunday morning dawned clear and bright, and the F3A group kicked off to an early start, completing the 3rd round. The day developed hot and humid, with an in blowing breeze, and a high glare blue sky, which made flying and judging quite difficult. (Pattern flyers are never satisfied are they!) We also flew off 2 more rounds for all classes, for a total of 5 for the weekend. The wind continued light and variable until near in the final round, when it swung to the East, and became stronger and blustery, but all pilots finished without incident.

Advanced was won by the new kid on block, with Tim Voigt winning by 1.7 normalised points, from a much-improved Con Kyriakides, with Alastair relegated to third.

In Expert, it was a close contest as well, with all 4 participants winning at least 1 round, finishing with Brian McFarlane winning overall from Chris Tindall, with Felix Nieuwenhuizen in third, ahead of Gavin Fitz-Henry.

The “Masters” class was arbitrarily selected from those entrants who held, or had held, a Masters ranking. Five rounds of P23 were flown, with David McFarlane turning the tables on Shayne Lysaght this time, with Jason Arnold in third. Bill Garrod and Phil Spence filled the remaining places.

The F3A group was also hotly contested, with 5 different winners over 5 flights! Honours were narrowly taken by new boy Rod O’Neil from Kahl Eckersley, followed by Chris Henry, Tom Collinge and Brian McGowan. All 5 contestants were separated by only 130 normalised points; a tight contest indeed!

A really great weekend was had by all, and a reasonably early finish allowed for packing up and announcing results, with enough time left for the long-distance commutes not to be too onerous.

The weekend was a great curtain raiser for a busy period in the Pattern calendar, starting with the APA Championships at Twin Cities from 11th to 13 March, followed the next weekend by the One-day double headers at Richmond on Saturday 26th March, and Pitt Town on Sunday 27th March.

Looking forward to meeting up at these 3 events.